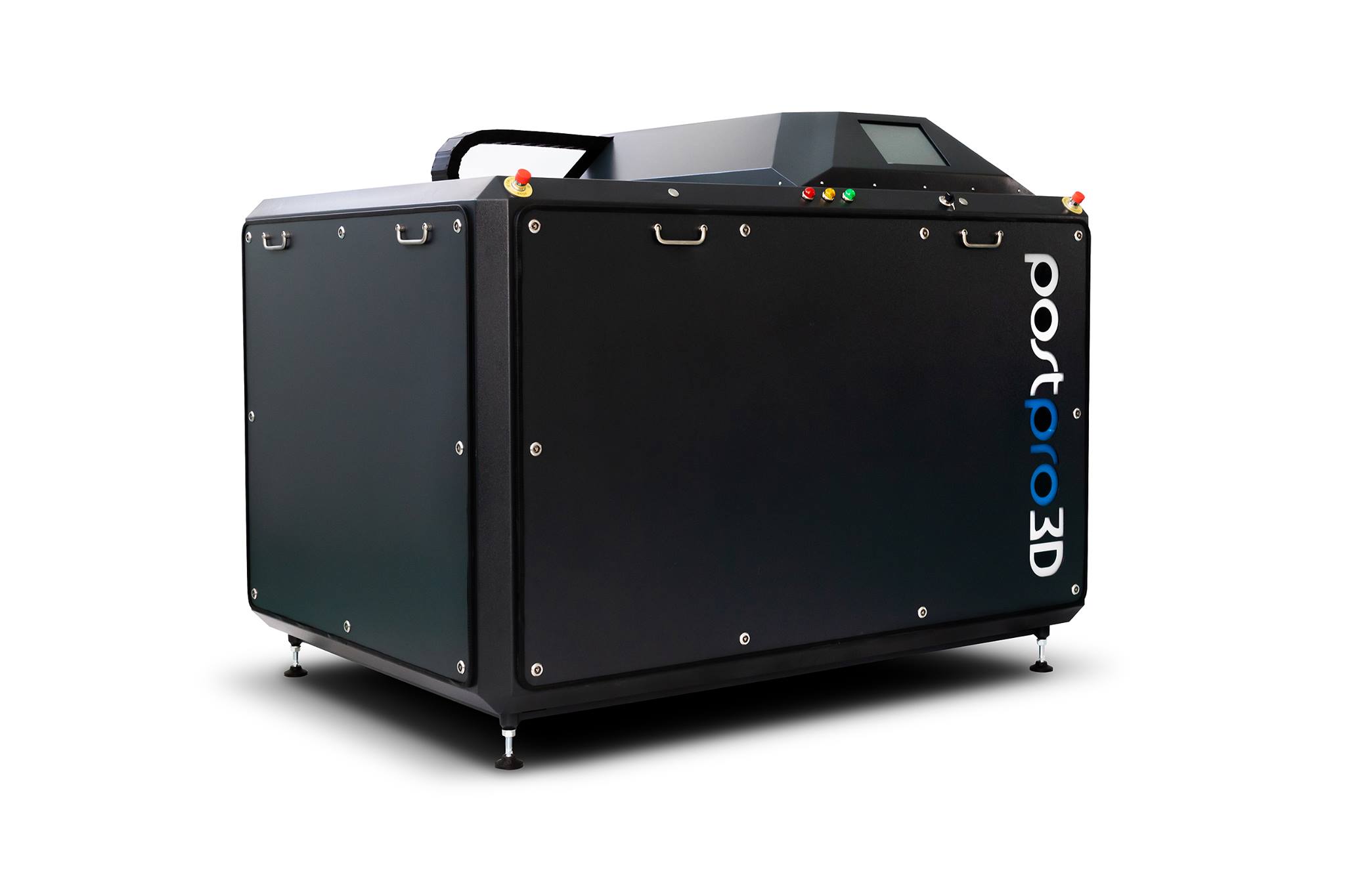 “Food-contact applications are definitely a place where 3D printing will take a bigger piece of the cake, it’s only the tip of the iceberg for us with surface treatment. It’s a market that will grow a lot in the coming years, so there’s a big potential there.” That’s how Mads Østergaard, Team Manager at The […]

“The smaller the particle, the bigger the hammer.” This rule from particle physics, which looks inside the interior of atomic nuclei using gigantic accelerators, also applies to this research. In order to “X-ray” a two-atom molecule such as oxygen, an extremely powerful and ultra-short X-ray pulse is required. This was provided by the European XFEL which started operations in 2017 and is one of the the strongest X-ray source in the world

In order to expose individual molecules, a new X-ray technique is also needed: with the aid of the extremely powerful laser pulse the molecule is quickly robbed of two firmly bound electrons. This leads to the creation of two positively charged ions that fly apart from each other abruptly due to the electrical repulsion. Simultaneously, the fact that electrons also behave like waves is used to advantage. “You can think of it like a sonar,” explains project manager Professor Till Jahnke from the Institute for Nuclear Physics. “The electron wave is scattered by the molecular structure during the explosion, and we recorded the resulting diffraction pattern. We were therefore able to essentially X-ray the molecule from within, and observe it in several steps during its break-up.”

For this technique, known as “electron diffraction imaging,” physicists at the Institute for Nuclear Physics spent several years further developing the COLTRIMS technique, which was conceived there (and is often referred to as a “reaction microscope”). Under the supervision of Dr Markus Schöffler, a corresponding apparatus was modified for the requirements of the European XFEL in advance, and designed and realised in the course of a doctoral thesis by Gregor Kastirke. No simple task, as Till Jahnke observes: “If I had to design a spaceship in order to safely fly to the moon and back, I would definitely want Gregor in my team. I am very impressed by what he accomplished here.”

The result, which was published in the current issue of the journal Physical Review X, provides the first evidence that this experimental method works. In the future, photochemical reactions of individual molecules can be studied using these images with their high temporal resolution. For example, it should be possible to observe the reaction of a medium-sized molecule to UV rays in real time. In addition, these are the first measurement results to be published since the start of operations of the Small Quantum Systems (SQS) experiment station at the European XFEL at the end of 2018.

Materials provided by Goethe University Frankfurt. Note: Content may be edited for style and length.

At CES, among the bigger, brighter TVs, mock smart homes that seem to know more about you than you do, and all the Alexa- and Google-Assistant-enabled devices eager to talk to you, are a few products that defy categorization. Some of these new products grabbed my attention because they involve truly innovative technology. Some are just clever and cheap enough to catch on, and some are a little too wild to find a big market—but it’s still impressive when a developer realizes an extreme dream.

So, as CES 2020 retreats into history, here is my top 10 list of CES gadgets that at least got my attention, if not a spot on my shopping list. There is no way to rank these in order of importance, so I’ll list them roughly by size, from small to big. (The largest products demonstrated at CES, like John Deere’s AI-powered crop sprayer, Brunswick’s futuristic speedboat, or Hyundai’s flying taxi developed in partnership with Uber Elevate can’t be called gadgets, so didn’t make this roundup.)

Not everything is bigger in Texas — some things are really, really small. A group of engineers at The University of Texas at Austin may have found a new material for manufacturing even smaller computer chips that could replace silicon and help overcome one of the biggest challenges facing the tech industry in decades: the inevitable end of Moore’s Law.

In 1965, Gordon Moore, founder of Intel, predicted the number of transistors that could fit on a computer chip would double every two years, while the cost of computers would be cut in half. Almost a quarter century later and Moore’s Law continues to be surprisingly accurate. Except for one glitch.

Silicon has been used in most electronic devices because of its wide availability and ideal semiconductor properties. But chips have shrunk so much that silicon is no longer capable of carrying more transistors. So, engineers believe the era of Moore’s Law may be coming to an end, for silicon at least. There simply isn’t enough room on existing chips to keep doubling the number of transistors.

Researchers in the Cockrell School of Engineering are searching for other materials with semiconducting properties that could form the basis for an alternative chip. Yuanyue Liu, an assistant professor in the Walker Department of Mechanical Engineering and a member of UT’s Texas Materials Institute, may have found that material.

In a paper published in the Journal of the American Chemical Society, Liu and his team, postdoctoral fellow Long Cheng and graduate student Chenmu Zhang, outline their discovery that, in its 2D form, the chemical element antimony may serve as a suitable alternative to silicon.

Antimony is a semi-metal that is already used in electronics for some semiconductor devices, such as infrared detectors. As a material, it is only a couple of atomic layers thick and has a high charge mobility — the speed a charge moves through a material when being pulled by an electric field. Antimony’s charge mobility is much higher than other semiconductors with similar size, including silicon. This property makes it promising as the building block for post-silicon electronics.

Liu has only demonstrated its potential through theoretical computational methods but is confident it can exhibit the same properties when tested with physical antimony samples, which is the team’s next step. But the findings have even broader significance than simply identifying a potential replacement for silicon in the race to maintain Moore’s Law into the future.

“More importantly, we have uncovered the physical origins of why antimony has a high mobility,” Liu said. “These findings could be used to potentially discover even better materials.”

Materials provided by University of Texas at Austin. Note: Content may be edited for style and length.

Arapaima gigas is a big fish in a bigger river full of piranhas, but that doesn’t mean it’s an easy meal. The freshwater giant has evolved armor-like scales that can deform, but do not tear or crack, when a piranha — which has one of the animal kingdom’s most powerful bites — attacks. Researchers from UC San Diego and UC Berkeley describe the unique properties of the Amazonian Arapaima skin and its potential for human-made materials October 16 in the journal Matter.

Arapaima‘s adaptation naturally solves a problem that engineers face when attempting to develop synthetic armors. Arapaima‘s scales have a tough, yet flexible, inner layer bound by collagen to its mineralized outer layer of scales. Similarly, bullet-proof vests are made of several layers of flexible webbing sandwiched between layers of hard plastic. But human-made materials are bound using a third adhesive material, whereas the fish’s scales are bound on an atomistic level; they grow together, weaving into one solid piece.

“A window may appear strong and solid, but it has no give. If something attempted to puncture it, the glass would shatter,” says senior author Robert Ritchie, a materials scientist at UC Berkeley. “When nature binds a hard material to a soft material, it grades it, preventing this shattering effect. And in this case, the binding structure is mineralized collagen.”

Other fish use collagen like Arapaima does, but the collagen layers in Arapaima scales are thicker than in any other fish species. The scales alone are each as thick as a grain of rice. Co-authors Yang, Quan, Meyers, and Ritchie hypothesize that this thickness is the secret to the fishes’ defense.

They tested this by soaking cracked Arapaima scales in water for 48 hours, then slowly pulling the edges apart while adding pressure to a central point. As they added pressure, they observed that the part of the mineralized, hard outer layer expanded, cracked, then gradually peeled off. The scales then localized the crack, containing it and preventing damage from spreading in the twisting structural collagen layer. If the pressure did break through to the collagen, it deformed the layer instead of breaking it.

If humans can develop a flexible hierarchical structure that behaves like the collagen layer in the fish scales, Ritchie says that better, potentially impermeable, synthetic armors can be made. But he also acknowledges that this reality may be a number of years down the line.

Until then, Ritchie’s team will investigate how Arapaima‘s scales have adapted to prevent penetration from piranha bites as well as how nature behaves this way in other species.

Materials provided by Cell Press. Note: Content may be edited for style and length.

I have changed the “bucket” to be wider for bigger “projectiles” and added a thumb wheel of easy range adjustment.

But the bigger redesign is the fulcrum. I split it into two parts to be printed easier.
Now the hole for the axle goes now through all the way, so a longer threaded is needed

As mentioned below I managed to break/wear out the spring rather quickly.
Hence I added a beefed up version. This might not be the engineering approach of Leonardo as he had presumably no access to rubber bands. I use my catapult as an office toy and am therefore not too concerned with historical accuracy.

P.S. I will need to redesign the spring and strengthen it. It suffered material fatigue due to tightening the rubber bands to much, because I wanted to increase range and power. Stay tuned!