Dirac matter is an intriguing class of materials with rather peculiar properties: electrons in these materials behave as if they had no mass. The most prominent Dirac material is graphene, but further members have been discovered during the past 15 years or so. Each one of them serves as a rich playground for exploring ‘exotic’ electronic behaviours, some of which hold the promise to enable novel components for electronics. However, even if Dirac matter and other so-called topological materials — in which electrons behave in similarly unexpected ways — are among the currently most intensively studied condensed-matter systems, there are only very few examples where the topology of the electronic bands is connected in a well-defined manner to the magnetic properties of the materials. One material in which such interplay between topological electronic states and magnetism has been observed is CaMnBi2, but the mechanism connecting the two remained unclear. Writing in Physical Review Letters, postdoc Run Yang and PhD student Matteo Corasaniti from the Optical Spectroscopy group of Prof. Leonardo Degiorgi at the Laboratory for Solid State Physics of ETH Zurich, working with colleagues at Brookhaven National Laboratory (US) and the Chinese Academy of Sciences in Beijing, now report a comprehensive study in which they provide clear evidence that it is a slight nudge on the magnetic moments, known as spin canting, that provokes substantial changes in the electronic band structure.

Compass points to the right direction on a bumpy road

CaMnBi2 and the related compound SrMnBi2 have recently attracted attention as they display quantum magnetism — the manganese ions are antiferromagnetically ordered at around room temperature and below — and at the same time they host Dirac electrons. That there is interplay between the two properties has been suspected for some while, not least as at ~50 K there appears an unexpected ‘bump’ in the conduction properties at these materials. But the precise nature of this anomaly was still poorly understood until now.

In earlier work studying optical properties, Corasaniti, Yang and co-workers had established already a link to the electronic properties of the material. They used in particular the fact that the bump-like anomaly in the transport properties can be shifted in temperature by replacing some of the calcium atoms with sodium. To get now to the microscopic origins of the observed behaviour, they studied samples with different sodium dopings by torque magnetometry. In this technique, the torque on a magnetic sample is measured when it is exposed to a suitably strong field, similarly as a compass needle aligns with the Earth magnetic field. And this approach proved to point the team to the origins of the anomaly.

A firm link between magnetic and electronic properties

In their magnetic-torque experiments, the researchers found that at temperatures where no anomaly is observed in the electronic transport measurements, the magnetic behaviour is such as one would expect for an antiferromagnet. This was not the case anymore at temperatures at which the anomaly is present. There, a ferromagnetic component appeared, which can be explained by a projection of magnetic moments onto the plane orthogonal to the easy spin c-axis of the original antiferromagnetic order. This phenomenon is known as spin-canting, induced by a so-called super-exchange mechanism.

These two sets of experiments — optical and torque measurements — were supported by dedicated first-principles calculations. In particular, for the case where spin canting was included in the calculations, a peculiar hybridization between the manganese and bismuth atoms was found to mediate the interlayer magnetic coupling and to govern the electronic properties in the material. Taken together, the study therefore establishes that sought-after direct link between the magnetic properties and changes to the electronic band structure, reflected in the bump anomaly of the transport properties.

With such detailed understanding on board, the door is now open to exploring not only the electronic properties of CaMnBi2 and related compounds, but also the possibilities arising from the connection between magnetic properties and topological states in these intriguing forms of matter.

Materials provided by ETH Zurich Department of Physics. Note: Content may be edited for style and length. 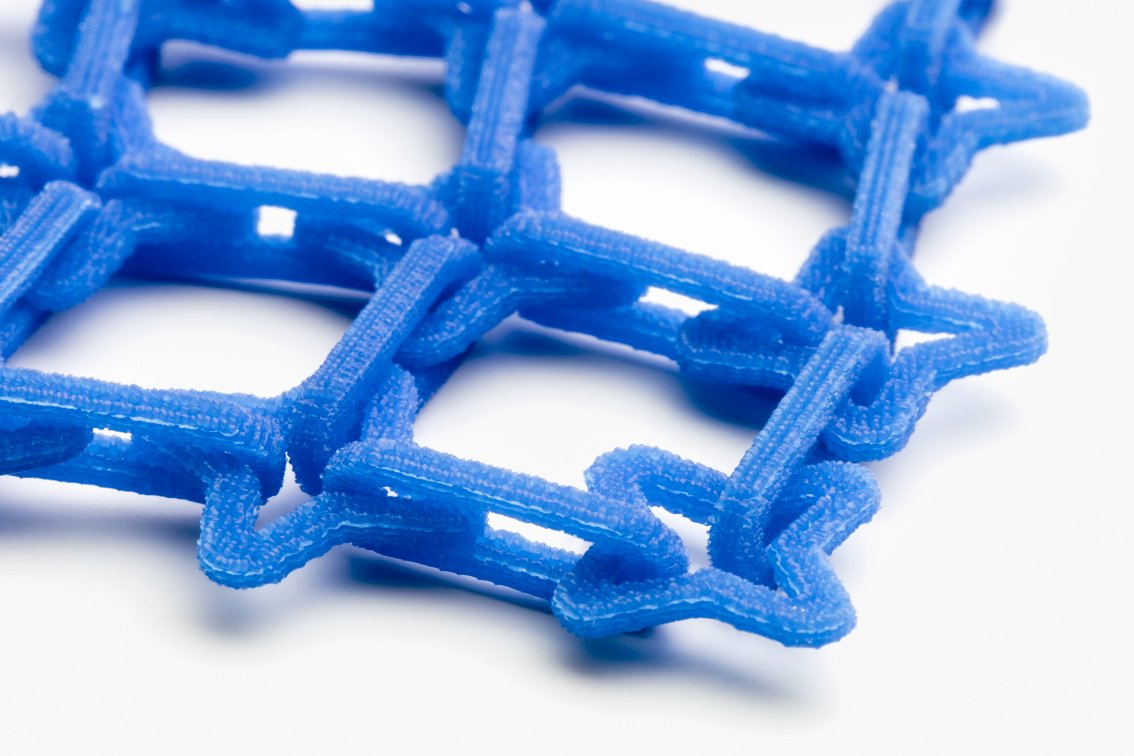 3D printing with silicone is a rather niche area, however, activity does appear to be heating up. The two companies in this news update both offer 3D printing solutions for users who want to access the benefits and material properties of silicones. Albright Silicone, a Massachusetts-based engineering company, has launched a new 3D printing silicone […]

Use of an AC rather than a DC electric field can improve the piezoelectric response of a crystal. Now, an international team of researchers say that cycles of AC fields also make the internal crystal domains in some materials bigger and the crystal transparent.

“There have been reports that the use of AC fields could significantly improve the piezoelectric responses — for example by 20% to 40% — over DC fields and the improvements have always been attributed to the smaller internal ferroelectric domain sizes that resulted from the cycles of AC fields,” said Long-Qing Chen, Hamer Professor of Materials Science and Engineering, professor of engineering science and mechanics, and professor of mathematics at Penn State. “About three years ago, Dr. Fei Li, then a research associate at the Materials Research Institute at Penn State, largely confirmed the improvement of piezoelectric performances from application of AC fields. However, it was not clear at all how the internal ferroelectric domains evolved during AC cycles.

“Our group does mostly computer modeling, and more than a year ago we started looking into what happens to the internal domain structures if we apply AC fields to a ferroelectric piezoelectric crystal. We are very curious about how the domain structures evolve during AC cycles. Our computer simulations and theoretical calculations did show an improved piezoelectric response, but our simulations also demonstrated that the ferroelectric domain sizes actually got bigger during AC cycles rather than smaller as reported in the literature.”

Researchers at Xi’an Jiaotong University in China then grew their own PMN-PT crystals and carefully examined the domain configurations within their samples using various experimental characterization techniques under different AC cycling conditions. They confirmed the computational predictions from Penn State that domains actually become larger during AC cycles.

The researchers report today (Jan. 15) in Nature that “the work presents a paradigm to achieve an unprecedented combination of properties and functionalities through ferroelectric domain engineering, and the new transparent ferroelectric crystals reported here are expected to open up a wide range of hybrid device applications, such as medical imaging, self-energy-harvesting touch screens and invisible robotic devices.”

Materials provided by Penn State. Note: Content may be edited for style and length.

The more dynamic robots get, the more likely they are to break. Or rather, all robots are 100 percent guaranteed to break eventually (this is one of their defining characteristics). More dynamic robots will also break more violently. While they’re in the lab, this isn’t a big deal, but for long term real-world use, wouldn’t it be great if we could rely on robots to repair themselves?

The public are more likely to blame accidents involving semi-autonomous cars on driver — rather than machine — error, a new study has found.

An international research team, including Edmond Awad from the University of Exeter’s Business School, has examined how the general public attribute blame in accidents involving self-driving cars.

It found that in crashes involving a car that has dual human and AI controls, the public presume that the machine is less accountable.

The study is published in the journal Nature Human Behaviour on Monday, October 28th 2019.

While the pursuit of creating fully ‘driverless’ cars has been the goal for many manufacturers in recent years, they still remain some way off from coming to fruition.

Instead, manufacturers are developing semi-autonomous cars that can be controlled by both AI through an “autopilot” mode, and human drivers.

These developments, however, mean a step-change from individuals having full control over their vehicles — and therefore bearing full responsibility for crashes — to a new system where blame and responsibility may be shared between a human and a machine.

For the study the research team, which also includes experts from the Massachusetts Institute of Technology, the University of British Columbia, Max-Planck Institute, Toulouse School of Economics, and Harvard University, asked members of the public to consider hypothetical cases in which a pedestrian was killed by a car operated under shared control between humans and machines — and to indicate how blame should be allocated.

It found that when one driver makes an error, they were blamed more — regardless of whether that driver is a machine or a human.

Significantly, however, when both drivers make errors in cases of human-machine shared-control vehicles, the blame attributed to the machine is reduced.

The team suggest that the study highlights a public under-reaction to potential malfunctioning AI components of automated cars that could cause an incident. Instead, there is a greater presumption that the human driver should be held more accountable.

This could, in turn, mean that the ‘de-facto’ standards for shared-control vehicles established in courts by the jury system could fail to properly regulate the safety of those vehicles.

Instead, the team suggest a top-down scheme, through federal laws, may be needed to ensure that the responsibility for crashes is properly attributed.

Dr Edmond Awad, from Exeter’s Business School explained: “It seems like if we leave it to the general public, they may unintentionally go soft on AV manufacturers to improve their safety standards.”

Materials provided by University of Exeter. Note: Content may be edited for style and length.

Today we solder Boldport’s Krell synth! An oldie rather than something new, but I miss putting things together in the studio. Plus, hear about the changes happening as Saar transitions to working with Pimoroni and Velleman.

Be sure to check out Adafruit’s Machine Learning Monday, as well: they are running some cool AI demos, with their new BrainCraft system for Raspberry Pi and more. https://blog.adafruit.com/2019/09/02/machine-learning-monday-braincraft-hat-for-raspberry-pi-and-single-board-linux-computers-adafruit-raspberry_pi-tensorflow-machinelearning-tinyml-raspberrypi/

In the video below, a four-year-old is shown attempting a rather long put in a seemingly haphazard fashion. First appearances, however, are apparently misleading here, as the ball actually curves to its destination, sinking in the cup after an apparently brilliant read of the landscape. While it is a brilliant read, the toddler isn’t actually the one doing the reading, but an overhead camera that detects the golf ball and hole positions.

As the ball moves, the system corrects its trajectory using an internal electric motor and some flavor of wireless communications for control. You can see a glimpse of the balls internals at 0:55 in the clip, though details of how it works are rather slim. (We did spot an embedded XBee module, but that’s about it.) Impressively, a little later in the video several adult golfers of unknown skill are seen attempting a put at the same time, and just like the single-ball exploit, it’s able to control five balls into the hole at the same time.

The hack is meant to promote Nissan’s ProPILOT 2.0 system, a not-quite self-driving mode that will be available on their new Skline model when it debuts next month in Japan. We of course welcome fun hacks, whether from large corporations or the basement tinkerer, and hope to see more of this type of promotional material in the future!